This is the second in a series of blog posts about typing accuracy.

Every person has their own way of typing and makes their own kind of mistakes. I noticed I usually hit my E key very close to the R key, which oftrn results in annoying typos. The autocorrect algorithm corrects these errors on most occasions. However, if I make too much of these errors the algorithm will have a very hard time trying to find my intended word. For every insertion, deletion or substitution the algorithm adds a penalty to the suggested word probability/score. Therefore more errors means it is less likely for the algorithm to find the word I tried to type.

The errors I make while typing depend on the situation I am in at that particular moment. When I am on my bike I tend to make a lot more errors, especially biking home after a good night out :) It would be nice if my phone learnt something from my recurring mistakes. And because the mistakes are affected by a lot of external factors, I would like a model that is personal and automagically updates based on my current ‘state’.

After reading a bunch of research papers I noticed that a lot of the models had to be trained offline or required a certain amount of training data. The model I want to use should be able to be trained on the actual phone itself, preferably without any internet connection. I decided to use the touch points to estimate the parameters of a bivariate Gaussian (normal) distribution. The idea started with a paper by Antti Oulasvirta et al. where they used Gaussian distributions and calculate the distance to a key like this \(P\left( K \;\middle\vert\; T \right) = \exp (- \frac{d_k^2}{\sigma_k^2} )\) With \( d_{k} \) as the Euclidean distance of a touch point to the center of key \(k\) and \( \sigma_{k} \) as the variance of the touch point distribution around the key center. \( \sigma_{k} \) is a parameter that they estimated from training data. So for every new touch point, they calculate the probability of that touch point belonging to any given key. I am going to implement something similar however I will also use the correlation between the x and y coordinates.

A nice way to visualize bivariate normal distributions is to plot their isocontours (or elevation contours). The distributions have distinctive shapes based on their parameters. The pictures below shows the three different variations.

The dataset used in this example consists of annotated data collected from users typing on the gaia keyboard. The users had to type fixed sentences, therefore the intended touch targets are known. For every touch we have information about the x and y coordinates and the key they intended to hit. The figure below shows an example of recorded data for the key E, where green dots were ‘on target’ and red points missed the intended key. More on the dataset here 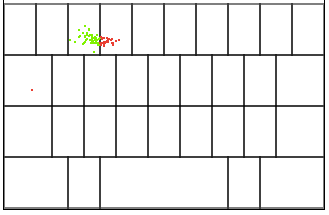 For each of the N keys we will estimate the parameters of a multivariate normal distribution. Given this set of N distributions and one new touch point T we can calculate which key is the most probable intended target. To do so we need to use some kind of distance measure. The measure we will use is the Mahalanobis distance as it takes correlation between dimensions into account. The Mahalanobis distance is defined as \(D_m(x) = \sqrt{(x-\mu)^T S^{-1} (x-\mu)}\)

To calculate the inverse covariance matrix \(S^{-1}\) we first need to build the covariance matrix \(S\). Lets start by calculating the variance. Variance is a measure that is used to determine how far points are spread out. \(\sigma^2 = \frac{1}{N-1} \sum_{i=1}^N (x_i - \mu)\) In this example we calculate the variance for both dimensions on one loop

Finally we can calculate the distance between a new sample and a distribution! Given the sample, mean and inverse matrix we can use the definition for the Mahalanobis distance \(D_m(x) = \sqrt{(x-\mu)^T S^{-1} (x-\mu)}\)

Which key did we intend to touch?

For every key we estimated the distribution parameters. For every new sample (touch event) we can calculate the distance to those key distributions. The key with the smallest distance will be selected as intended target. Note that the touch coordinates do not necessarily have to be within the key boundaries.
Instead of picking one most probable touch target we could also use the distance to the keys to estimate the probability that this touch event belongs to a certain key. These probabilities could be used to assist the autocorrect algorithm. For example by sending a map with keys and corresponding probabilities instead of one distinct key as input. 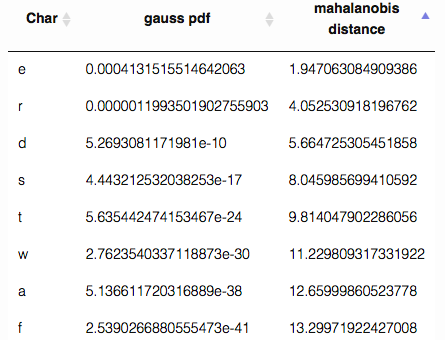